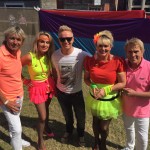 British Eurovision events are often created by fans, not least the annual UK Eurovision Preview event in London and regular Eurovision partyline, Eurofest. Both helped in supporting Bristol Pride to develop a hugely popular Eurovision section during yesterday’s event and it’s success means it may well be increased next year.

He relocated to the city two years ago and is keen to promote Bristol as a Eurovision host city if the United Kingdom win the competition again. Building and creating a Bristol Eurovision connection is already underway as Pride showed yesterday. The Mayor of Bristol, George Ferguson has also tweeted his support for bringing Eurovision to Bristol.

Stockholm Pride has for years been the undisputed Eurovision Queen of Pride events, but Bristol is hoping to grow into a challenger for the crown. This year, the United Kingdom’s 1981 winners Bucks Fizz rocked the Main Stage, with over 20,000 people enjoying a spectacular 40 minute live performance and it has more than shown that there is a market for future Bristol Eurovision events.

These days, for legal reasons, Cheryl, Mike and Jay are known as ‘Formerly of Bucks Fizz’ but along with Bobby McVay, who also represented the United Kingdom at Eurovision as part of Sweet Dreams, they rolled back the years and showed how talent can prove the key to longevity. They celebrate 35 years since their famous Eurovision win in Dublin next year.

Along with (formerly of) Bucks Fizz, Nicki French, who claimed 16th place at the 2000 Eurovision Song Contest at the Globen Arena, Stockholm was in town to perform her entry ‘Don’t Play That Song Again’ and her new song, ‘This Love’. The single marks the 20th anniversary of her global smash hit ‘Total Eclipse of the Heart’.

Iceland’s Euroband, who finished 6th at the 2008 Eurovision Song Contest in Belgrade were also in town to join Nicki French in performing at the Bristol Pride after party at the O2 academy. London Eurovision party line Eurofest were promoting their first ever event outside of the Capital and the event proved hugely successful.

The development of the Bristol Eurovision connection was one of the highlights of an incredible day, the busiest ever Pride event in Bristol. Bristol Pride remains the largest free Pride event in the United Kingdom, despite lacking any funding from Bristol City Council and facing a massive increase in red tape and administration. The city has already lost St. Pauls carnival this year and Pride is a huge source of revenue for local business. It brings tourism to the city and remains under threat of becoming a paid event if additional funding cannot be found.

Maintaining Bristol Pride as a free event creates a massive feel-good factor for the city, with social integration, education and understanding found through entertainment, colour and events that run through the week. Bristol Marketing’s Benny Royston has been proud to support Pride, working to build the Eurovision connection and attract some of the army of Eurovision fans around Europe to Bristol.

Benny Royston has gone on record to say that Bristol would be an ideal Eurovision Song Contest city if only the United Kingdom could enter a song capable of victory in the world’s longest running televised music competition. He told the Bristol Pride website “The Mayor’s said he’d back a bid to host the competition here and it’s time to put Bristol on the Eurovision map”. 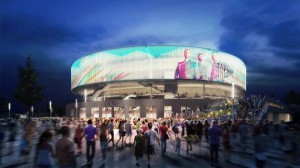 With the Bristol Arena due for completion in 2017, Bristol has everything a Eurovision host city would need. There is plenty of hotel capacity, along with the new state of the art arena, Bristol Airport has recently named the most punctual in the world and has just opened its expanded passenger area. It has direct flights to the vast majority of Eurovision countries and the O2 Academy would make an ideal Euroclub. The BBC, who would be the host broadcaster, have a major office hub in Bristol and already have a local production centre.

Hosting the Eurovision Song Contest is a massive marketing opportunity for a city. It is normal for cities to enter bids for the right to host the event when their country wins. This year, Gothenburg put in a strong bid to host the 2016 Eurovision Song Contest but lost out to Stockholm. It is an opportunity to showcase a city for international tourism and provides a huge number of jobs in construction, the events industry and local tourism. It also means a boost to the local economy as several thousand delegates, fans and production crew move into town.

The 2013 event in Copenhagen saw the renovation of a disused shipyard as it was turned into the host arena, and in Vienna, huge investment into the local area was made in order to showcase the city to over 300,000,000 television viewers. 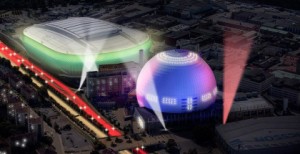 Copenhagen saw a Eurovision Island concept but it left plenty of room for development. The 2016 Eurovision planning at the Globe complex in Stockholm is likely to expand on the idea. With the Bristol Arena comes the potential for a Eurovision Harbour, with ferry travel between arena and press centre, fan café and Euroclub – all part of the modern day Eurovision requirements. There’s no question that bidding for and hosting the Eurovision Song Contest would be an incredible marketing challenge for Bristol.

« How well do small businesses in Bristol understand customer social media habits on Facebook and Twitter?
Supporting an awareness day through your small business »